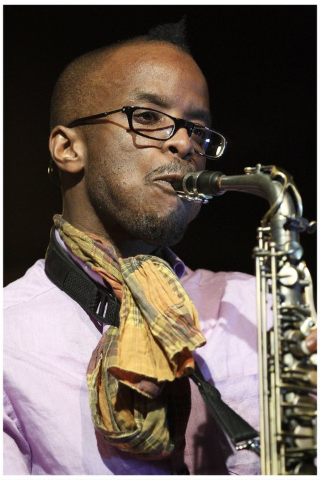 More than a mere player, Jowee (pronounced “Joey”) is a unique and prolific composer, producer, arranger, vocalist band leader and music instructor who has devoted much of his time to passing down his broad knowledge of musicology to students of all ages. The son of a father who was both a minister and a professor of Theology, Jowee is now passionately focused on sharing his music with the world through recordings and performance. On May 18, 2010, Jowee had the honor of being invited to President Barack Obama’s White House to play his music for its inaugural observation of Haitian Flag Day before 150 VIP guests. With his latest release, “Roots & Grooves”, Jowee offers a work that is steeped in purpose yet listener-friendly and accessible to all. In essence, that is the only way he knows to approach the making of his music.

“Roots & Grooves is very different from my first CD, Let’s Do This (2006),” Jowee states of his album (mixed in Japan by acclaimed engineer Goh Hotoda who helmed Marcus Miller’s acclaimed CD Tales). “The quantifying equalizer is spirituality. Roots & Grooves is the complete Jowee – all the music the way I hear it. Aesthetically, I was directed to develop a special sound…” Jowee is an intuitive tone weaver of fusion, blending his singing voice with his “voice” on wind instruments, and in possession of a very unique approach to arranging.

Jowee Omicil was born in Montreal, Canada. Though his mother sadly died when he was very young, he remembers her always telling him to finish all the food on his plate – “achevez”– which he later adopted to mean “achieve your goals.” Jowee was raised by a very strong father, Joseph Omicil, Sr. minister of his own Elim Church of Montreal (“Elim” translating as a place to obtain water), a respected professor of philosophy, and a black man of Haitian descent in a not-always-supportive Canada. He sternly and single-handedly brought up five children of outstanding achievement: lawyers, accountants, an actor and Jowee.

Joseph insisted that all his children study music. Jowee, though reluctant at first, eventually embarked upon his studies as a spiritual journey and has taken musical arts the furthest in his family. “My dad’s dream was to have, like, a symphony within his church,” Jowee shares. “He wanted my younger brother and I to play wind instruments. The Bible speaks of David playing trumpet and my dad saw wind instruments as the ones that ’called to the people.’” One fateful Saturday morning, Jowee picked out an old silver Kohn alto saxophone with a transparent mouthpiece from the town music teacher’s stash. Practicing was a chore at first, but he slowly began to fall in love with it, later taking up soprano sax, then flute, clarinet and tenor sax, later even adding harmonica and piccolo to his resume. “I fell in love with sax at 15, going to the library and checking out records. First I discovered Steve Coleman & Five Elements (Black Science), then David Sanborn (Another Hand). I listened to Coltrane and Bird in Montreal but didn’t like them at first, so I just taped them and saved them for later. I was intrigued by the haunting sound of Kenny G. When I graduated, I received a full ride scholarship to the Berklee School of Music. I met some new friends who were really tight with another ’Kenny G’ – Kenny Garrett! He really turned me around and the rest is history.” Taking great inspiration from the innovative greats of be bop and beyond, Jowee reasons, “All of the great cats were searching. The new players merely go with the flow. They’re not searching for the inner self. They’re just dealing with the surface and what feels good – a vibe. Everybody is trying to play groove music but they don’t know why. Groove is like jazz – you’ve got to dedicate yourself…for example, I love ’Con Alma so much that I’ve got to find my own way to play it – because I am not Dizzy Gillespie. The way Dizzy put it out there for us is so we can make something else out of it.”

Jowee’s music is steeped in the spirituality set forth by his father. “I had the honor of producing music on the very last recording of Haiti’s great Pepe Bayard,” Jowee reflects. “He was dying while we were making that record, but immersing himself in music helped him live a whole lot longer. That’s the power of music… and that’s what I want to bring back. I also want people to DANCE to jazz again. Jazz was once popular music and I want the world to groove once again.”

WHAT THEY ARE SAYING ABOUT THIS MULTI-INSTRUMENTALIST / COMPOSER / EDUCATOR

“This young man is a very talented and gifted musician, always in the lab working on his songs and practicing his instrument. He is a person we will be hearing in the future. Keep your ears and
eyes open.”
–Kenny Garrett, Musician

“Jowee is the future of Haitian Jazz Music…among all of our artists in Haiti and living here in Miami, I think that he represents Haiti very well. We are proud of him.”
–The Honorable Ralph Latortue, Consul General of Haiti

“Jowee Omicil’s entire energy and spirit is infectious. His playing is alive, very human, very connected…Truly one of a kind and a good friend to have.”
–Renee Neufville, RH Factor

“Omicil’s music speaks to our hearts because it is full of generous statements that reflect his multicultural background and the eclectic aspect of his art. But the most fascinating side of this musician remains his dedication to work with children through workshops to bring awareness of music at a very early stage of life.”
–Alphonse Piard, KariJazz

“Jowee Omicil is the kind of artist that makes music worthwhile. It is clear to me that his music is a reflection of his beautiful inner spirit that smiles right back at you every time you listen to his music. The way he understands melody and rhythm is beyond me; and the way he is able to deliver his musical ideas is a gift to anybody’s soul. His sound is not only unique but amazingly brilliant.  Jowee understands the need to explore new ways of communicating with the world around him through music, and his versatility as a musician is simply overwhelming. Jazz needs him more than he needs Jazz. Nothing escapes his radar, it seems. He listens, internalizes and translates what happens in the world that surrounds him into music, and magic happens every time! His musical
vocabulary is rich and colorful, and listening to him is like getting  to know your best friend that much more. His creativity knows no boundaries, and that is what will always make him essential.
If that wasn’t enough, Jowee Omicil is a marvelous human being whom I have come to love as the brother he is to me.”
–Esther Berlanga-Ryan, Music from the Heart (Live365)/All About Jazz

“Jowee, yes, you are one of the great sax teachers and endorsers to the P.MAURIAT. When I met you at Berklee’s campus in 2002, I always remember well your great sound and enthusiastic  mood.”
–Alex Hsieh, CEO – P.Mauriat

“Jowee has an extraordinary gift and I am so happy he shared with the audience. His future is as bright as a star.”
–Calvin Hughes, WPLG, Channel 10 News anchor/ABC affiliate

“Jowee’s electrifying performance transformed a large character-less conference room into a vibrant, upbeat worldly atmosphere. Our audience of 400 plus students and parents felt moved beyond their own level of expectations that day. Of the many e-mails I received the day after, one parent stated ‘…how in the world will you top this event?’” “He is definitely the most mazing performer I have seen in concert in a long time. The students of Take Stock in Children were certainly moved by Jowee’s willingness to give his best performance all for the sake of inspiring them to reach great heights in their journey to college.”
–Marlyn Paris-Lawson, Take Stock In Children of Miami Dade