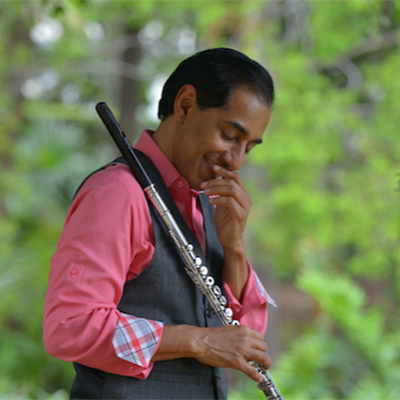 Equally fluent in Jazz, Classical and Latin Music, Nestor Torres’ melodic and rhythmical flute sound sets him apart. His career spans over 25 years and includes 16 CDs (including his most recent productions, Jazz Flute Traditions and del Caribe soy!), 4 Latin Grammy nominations, 1 Latin Grammy Award and a Grammy nomination, as well as collaborations with the likes of Tito Puente, Herbie Hancock, Ricky Martin, Dave Mathews, Gloria Estefan, and performances with, among others, The New World, Cleveland and Singapore Symphonies. As an educator, Nestor Torres has taught and lectured at the University of Southern California, University of Warwick in England, and University of Akron among others. He is also founder of The Cuban Danzon/Charanga Ensemble at Florida International University, and has received two honorary doctorate degrees for his commitment to youth, education, and cultural exchanges.